Trellis before and after

Over the last year and a half, much of the garden has been negelected, but there is one area of improvement: we replaced the crumbling trellis at the south end of the deck.

I never photographed this corner because I was not a fan of the lattice. Thankfully, I found a few photos from Paul for the "before" shots. 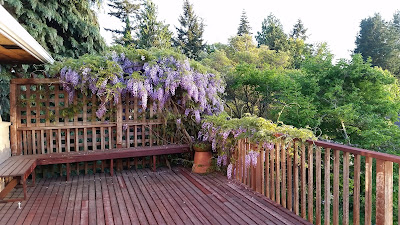 About a week earlier on May 5. 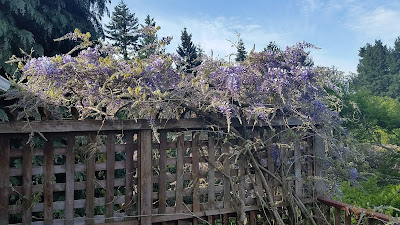 The old trellis in March 2019 as the house demo progressed (trellis is on the top right). 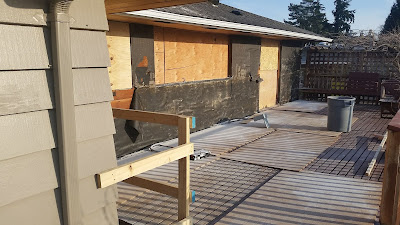 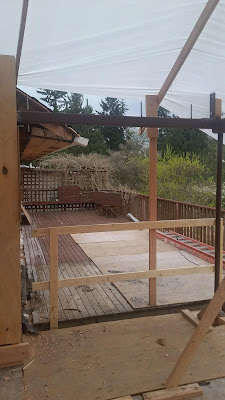 The trellis was completely removed and the wisteria temporarily attached to a makeshift support. Very temporarily, the whole thing blew down in late October. Note the mass of green mixed with caution tape in the middle, that is the wisteria which should be up on the top right. The wood on the ground is the fallen support. 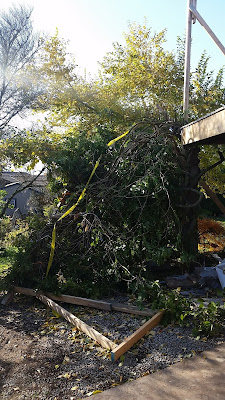 And now the new trellis, looking north just as the wisteria was beginning to bloom on May 3 of this year. 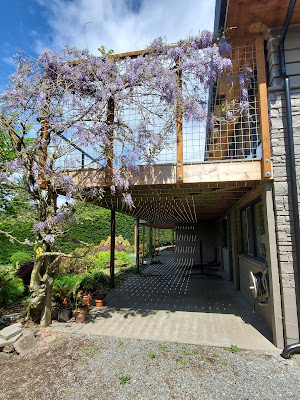 And looking south at our neighbors. 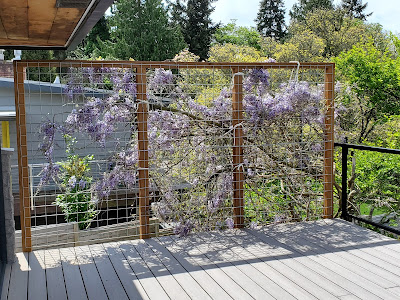 Our design goals were modern and cheap, plus capable of surviving an aggressive old wisteria. We went with galvanized hog fencing on pressure treated lumber.

Here it is in mid July, with the vine nicely providing privacy and catching the western sun. 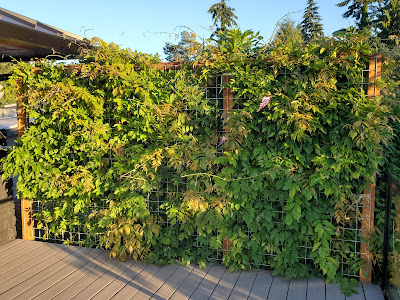 And this evening, blooming again. 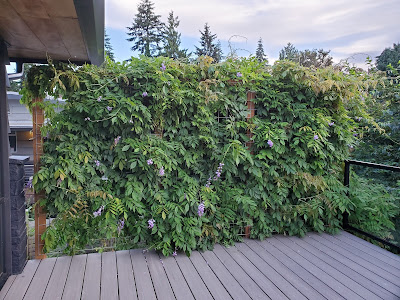 From below, looking north and slightly west. 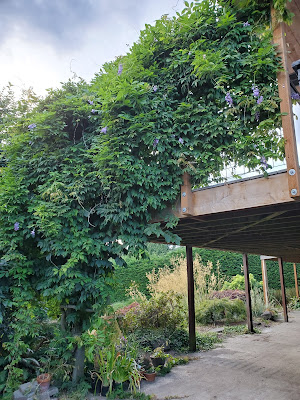 I love the wisteria when it is fully leafed out providing privacy; it is jarring in fall when the leaves drop. I debate growing a second evergreen vine up the opposite side (I'd add some sort of trellis ladder for it to climb from below, possibly from a large raised planter). But I am not sure what would pair well with a beast like wisteria, or if the two leaf shapes would clutter the trellis in summer. I do know I will be missing the lush green wall this winter!

The wisteria vine is an old monster, I particularly love its mossy trunk in winter. 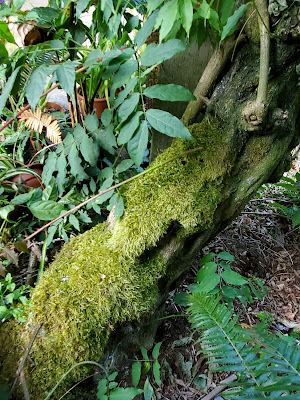 at August 02, 2020 No comments:
Email ThisBlogThis!Share to TwitterShare to FacebookShare to Pinterest

Just before leaving for Denver last week to attend the Garden Bloggers Fling, I was in the process of finalizing an order for some hard to find bromeliad species. My visit to the San Antonio Botanical Garden last December inspired the purchase; I admired the garden's display of epiphytic bromeliads growing on tree branches, small pitchers connected by a dramatic network of long stolons.

Below are the new arrivals from Michael's Bromeliads, all arrived neatly wrapped in newspaper with handwritten labels. If the offsets/pups look undersized, they should; most are mini Neoregelia species with a couple of small Aechmeas, plus an Acanthostachys for fun. Apologies for the terrible lighting. 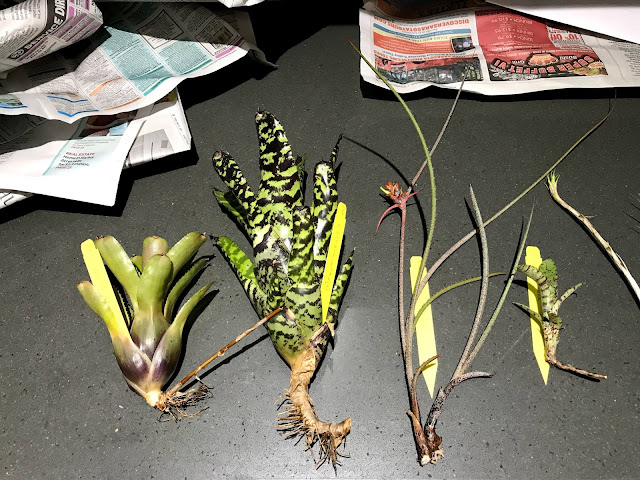 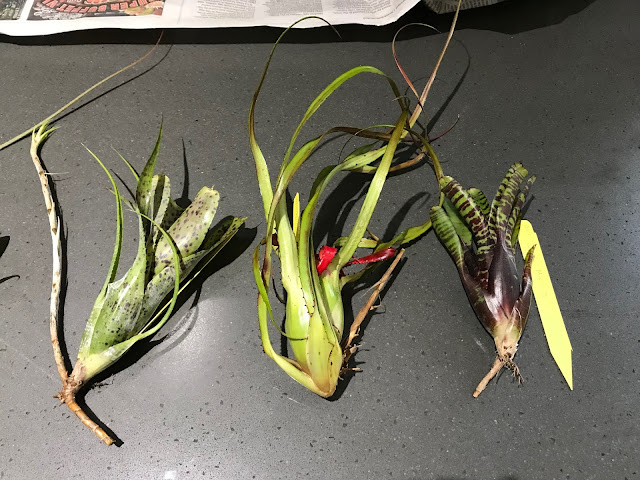 This was the bromeliad I most wanted but seemed impossible to find in the US, Neoregelia pendula var. brevifolia. 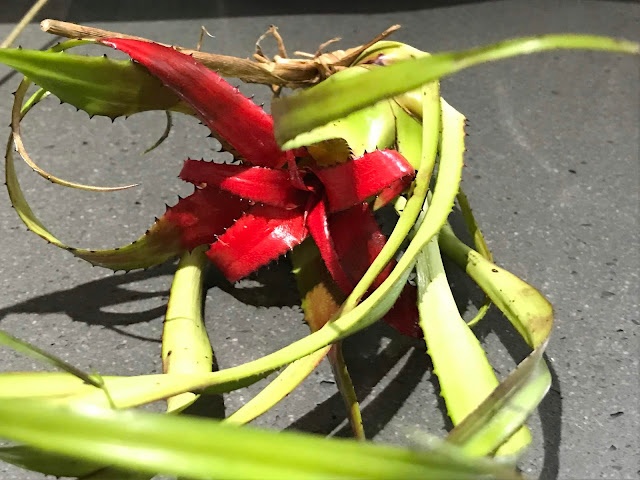 Acanthostachys strobileacea arrived already in bloom, or perhaps fruit? While bromeliads are monocarpic, an unbloomed offset was also attached, so the bloom was not a cause for concern. The blooming plant was a bonus and will hopefully produce pups as it declines. 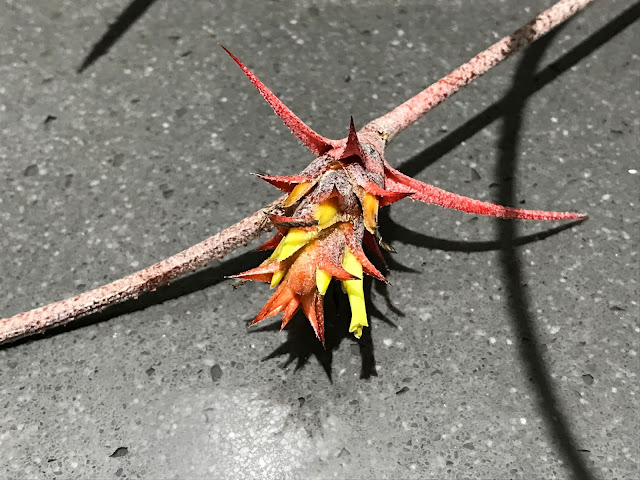 All of the new bromeliads arrived as unrooted offsets/pups separated from mother plants and will need time to root. For the potting substrate, I created a mix of coconut fiber, coconut chips, grit, and Orchiata orchid bark. And here are the bromeliads potted up. 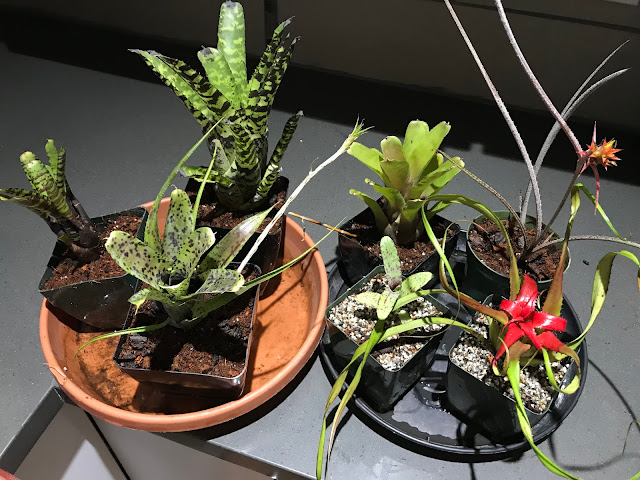